Symphonica - A prayer for George Michael

It's been a horrible, scary week. Today is Saturday and George Michael was supposed to fly into Cardiff today, to take his Symphonica Tour back to the UK. Instead he's in a hospital in Vienna with severe pneumonia. He's been in Vienna since Monday, when he was supposed to do a show there. But a few hours before showtime he got so unwell that a doctor was called and the show was popstponed. Over the next few days he got so ill he ended up in the ICU of the Viennese hospital.

I just hate to think of George being so desperately ill in a place so far from his beloved London. I'm sure he's getting the best possible care though, nobody in Vienna wants bad things to happen to George on their watch. And according to the official statement he's responding to treatment and slowly improving and of course that's the most important thing.


All the people who care about George from afar be they fans or not, and there are a lot of them, have been worried sick all week. Rumours flew as they always do in situations like this and his management kept shtumm for far too long, which was a big mistake if you ask me. But on Friday they finally came clean and confirmed what everyone knew was the only sensible thing to do: all the other 2011 dates were cancelled/postponed.

Again, as in October, there was no anger, only fear for George's health and an outpouring of love and concern for someone most of us have never met and never will. I guess that's the power of George Michael's music; we all feel we know and met him in his music.

Hundreds of messages flooded his facebook page, and twitter. I described his twittertimeline as an extra blanket of love and well-wishes and as sentimental as this sounds I truly believe that to be the case. In fact, I've experienced this myself - on a much smaller scale of course. I once was thousands of miles away from home, alone and very scared, in a very dangerous place (backlands of Nigeria). And I felt the love and prayers of my loved ones as a comforting and protecting bubble all around me. Invisible but almost tangible.

George's body and his medical treatment have to do the heavy lifting here, but I just know that all the prayers that are coming his way will help in some small undefinable way too. And there are so many forms of prayer. It doesn't matter if people are sending Reiki energy, sending positive thoughts his way, writing about him, asking their God to heal him or lighting a candle for him, those are all prayers and together they will hopefully keep him safe on his long road to recovery.

So I will keep praying for him in my own way, doing some of the things mentioned above, because I know he's not out of the woods yet. A friend of us had pneumonia a couple of years ago and it totally wiped him out. It took him months to get anywhere near his former health. And if you look in the comments section of the articles reporting the postponement of the tour, you can find many such stories. So this will take time, lots of time!

According to the physicians who are treating him George needs treatments and peace and quiet and rest. Lots of it!
Very true, but in a couple of months, when George is all better he also needs his head examined! He, and everyone else on team GM. What the hell were they thinking with a tour schedule like that! Endangering his health like that! Never again, George!

And finally: another big thank you to the whole Symphonica gang
When I wrote my thank you to mr. Hey, the singers and the band at the end of my last  review I had no idea that the Oberhausen show would be my last Symphonica show of 2011. If things had turned out differently I'd be in Cardiff right now, getting ready to welcome George back to the UK. I thought there would be time and reviews enough to get back to some more thank you's. Well, the time is now! So here is a proper thank you to everyone who gave us the magic of Symphonica.

First of all: thank you George, for singing so beautifully and giving us so much of yourself onstage. I loved all the shows I went to, but I'll never forget the first show in Herning (so emotional), those two shows in Verona (such an incredible gift) and the second show in Rotterdam (such fun). Thank you George for everything and please, please, please, get well soon.

Thank you Henry Hey for translating George's ideas and vision into the music of Symphonica and making his dream come true. Seeing you so happy with the result made us all happy too.

Thank you Jay, Lucy, Shirley and Lincoln for singing so wonderfully with George. Thank you for loving George as much as you do and being there for him. And thank you for being such a lovely presence on twitter, chatting with us fans.

Thank you band an orchestra for making such wonderful music night after night. Especially thanks to harpist Michal, pleasing us both with his wonderful harp playing and his obvious love for George and Symphonica.

An extra big thank you to Bev, our amazing official GeorgeMichael.com blogger. It was so great meeting you, Bev. We hope you'll come back to Symphonica again next year, but if not I wish you well with whatever you decide to do. I'm sure you'll be by very good at it too. 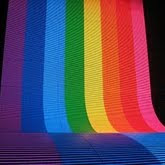